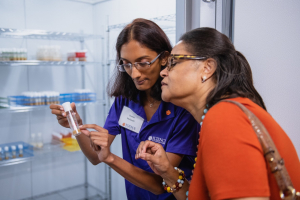 GREENWOOD, South Carolina – The Clemson Center for Human Genetics officially opened for
business Tuesday evening, celebrating with an enthusiastic gathering of supporters who met with scientists and toured the state-of-the-art facility.

Piloted by a cadre of researchers equipped with world-class laboratories and technologically advanced instrumentation, Clemson’s Center for Human Genetics
has successfully landed on the global stage – both in talent and scope. The center, which is part of Clemson’s College of Science, is dedicated to
advancing knowledge of the fundamental principles by which genetic and environmental factors determine and predict healthy traits and susceptibility
to disease.

The center is housed in Self Regional Hall with eight laboratories and several classrooms, conference rooms and offices for faculty and graduate students.
The 17,000-square-foot building is located on the campus of the Greenwood Genetic Center. During Tuesday’s event, the labs and hallways were jammed
with guests.

Trudy Mackay, director of the Center for Human Genetics, is recognized as one of the world’s leading authorities on the genetics of complex traits. Mackay,
the Self Family Endowed Chair in Human Genetics and Professor of Genetics and Biochemistry, is a fellow of the American Association for the Advancement
of Science. She has also been elected to the American Academy of Arts and Sciences, the Royal Society of London and the National Academy of Sciences.

Mackay is joined at Clemson by Robert Anholt, Provost’s Distinguished Professor of Genetics and Biochemistry and director of Faculty Excellence Initiatives
in the College of Science. Anholt is also a member of the American Association for the Advancement of Science.

“This is an exciting time in the field of human genetics and its connection to health and well-being,” said Mackay, who has won numerous international
awards, including the prestigious Wolf Prize, published more than 200 papers and trained graduate and postdoctoral students who have gone on to represent
the next generation of geneticists. “We now know that all of us are 99.9 percent identical in our DNA, but that 10th of a percent difference translates
to 3 million small genetic differences between any two of us. The challenge now is to understand how these molecular differences in DNA affect our
susceptibility to diseases like cancer and heart ailments.”

Tuesday’s event was the culmination of 13 years of planning, collaboration and diligence. The naming of Self Regional Hall recognized the ongoing support from Self Regional Healthcare, which has contributed $5.6 million to the facility. In addition, the $4 million endowed
chair held by Mackay was funded equally by the Self Family Foundation and the state of South
Carolina.

“We are confident that our investment in the Self Family Endowed Chair for Human Genetics will pay huge dividends in furthering research to prevent, treat
and cure genetic disorders,” said Frank Wideman, president of the Self Family Foundation. “We believe the synergy brought about by the intellectual
capital of the Clemson Center for Human Genetics and that of the Greenwood Genetic Center has unlimited potential.”

Clemson University President James P. Clements praised the Self family, the city of Greenwood, Greenwood County, the Greenwood Commissioners of Public
Works and the Greenwood Partnership Alliance for their generous support.

“Our partnership with the Greenwood Genetic Center, along with the amazing support we are receiving from Self Regional Healthcare and the Self Family Foundation,
will allow our faculty researchers to translate their findings into tangible treatment options more quickly and efficiently,” Clements said. “The work
being done here has the potential to make a huge difference in improving lives, which is at the core of Clemson’s mission as a land-grant university.”

Mackay and Anholt came to Clemson from North Carolina State, where they had conducted research for a combined 55 years. Most of Mackay’s new Clemson team
also hail from N.C. State, including staff scientists Richard Lyman and Roberta Lyman, postdoctoral research associate Chad Highfill and doctoral students
Brandon Baker and Sneha Mokashi. Rebecca Jones, who graduated with a bachelor’s degree in genetics from Clemson in May 2018, will be joining the team
as a graduate student. Karl Kelly will continue to provide support as director of operations.

“This is an outstanding example of how the power of partnership can collectively harness talent to improve lives,” said Cynthia Y. Young, founding dean
of Clemson’s College of Science. “Together, we have put a stake in the ground to develop a globally recognized center of excellence around human genetics
anchored by some of the world’s most talented scientists.”

Dr. Steve Skinner, director of the Greenwood Genetic Center, said that the impact of the collaboration
between the two centers will be transformative for genomics medicine.

“With the research expertise of Drs. Mackay and Anholt, and GGC’s illustrious history of providing clinical care and human genetics advancements, our combined
efforts will advance the understanding of human diseases and behaviors, as well as guide us toward potential treatments to improve the quality of life
for those impacted by neurodevelopmental and other genetic disorders.”

Skinner cited the recent joint acquisition of a NovaSeq 6000 DNA sequencer from Illumina as proof of the potency of the partnership.

“The NovaSeq is the most powerful sequencer available, and we have the only one in South Carolina,” Skinner said. “This instrument not only increases our
DNA sequencing capacity and ability to diagnose complex patients though whole genome sequencing, it also provides genomic data to advance Clemson’s
studies and GGC’s zebrafish models with the ultimate goal of improving patient health and quality of life.”

The main goals of the Center for Human Genetics include:

Much of the above will be accomplished by studying the inner workings of an insect that is smaller than a grain of rice. The fruit fly Drosophila melanogaster
has turned out to be a remarkably powerful gene discovery system for large-scale, population-based genetic studies. About 70 percent of fly genes have
human counterparts, which enable the construction of contextual genetic networks. Using the fly as their catalyst, Mackay and her team will seek new
breakthroughs in the treatment of addiction, glaucoma, alcohol and fatty liver disease, oxidative stress, heavy metal toxicity, aging and neurological
disorders.

“I am proud to lead Clemson’s Center for Human Genetics in Greenwood,” Mackay said. “We will have a strong connection to the main campus at Clemson to
strengthen our research and academic core. Together with our partners, we will accomplish a great deal in the coming years.”

Photo top: Graduate student, Sneha Mokashi, shows a vial of Drosophila to Mamie Nicholson of the Self Family Foundation.

Photo above left: The Clemson Center for Human Genetics (CCHG)

About Clemson University College of Science
The College of Science transcends boundaries and bridges connections across life, physical, and mathematical sciences. Its mission is to pursue excellence in scientific discovery, learning and engagement that is both locally relevant and globally impactful. For more information, visit https://cualumni.clemson.edu/give/science.

About Clemson Center for Human Genetics
The mission of the Clemson Center for Human Genetics is to advance and disseminate knowledge of the principles and mechanisms by which genetic and environmental factors affect human health and disease through discovery, education and engagement to benefit the health and well-being of the people of South Carolina, the nation and the world. For more information, visit https://www.clemson.edu/science/research/chg.html.