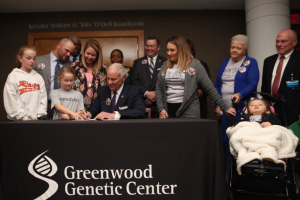 The law requires that SC add three new genetic conditions, Krabbe disease, Pompe disease, and MPS1 (Hurler syndrome), to the state’s current newborn screening
panel that is performed through a heel stick on all babies born in the state.

The law is named for Dylan Emery, an infant from Greenwood County who was diagnosed with the fatal infantile form of Krabbe disease at six months of age.

“When the Emery family came to us in May 2018, we offered them everything we could at that time. We found a quick diagnosis and gave them answers for Dylan’s
condition, however. We failed to offer them the hope and potential of treatment that he deserved,” said Steve Skinner, MD, Director of GGC, who diagnosed
Dylan. “Because Dylan’s condition was identified too late, he was not eligible for the potentially life-altering and life-saving treatments that are
currently available for those with Krabbe disease.”

Dylan passed away just a few weeks shy of his first birthday. During his short life, his family had raised awareness of this rare condition, even making
national news with Dylan’s brother, Andrew’s lemonade stand. Following his death, they worked with bill sponsor in the SC House, Rep. John McCravy,
to get Dylan’s Law passed so no other families would have to endure the suffering that they have endured.

McCravy credited the Emery family with their resolve to get the bill passed. “Instead of being bitter they turned it into something positive, caring about
others. Because of the Emery family, the Greenwood community, and the Greenwood Genetic Center, we’re proud to say that other newborns with Krabbe
will now have a chance for treatment.”

Throughout this whole process, this has been about Dylan,” said Matt Emery, Dylan’s father. “Dylan’s time on earth was short, but his legacy
lives on with Dylan’s Law.”
“This is a tragedy that has led to a great step forward,” shared McMaster prior to the ceremonial signing. “Our children are our greatest asset and if
there’s a way to keep them from getting disease, keep them from getting hurt or catching things early so we can treat them then we ought to take care
of every opportunity to do that.”
McMaster signed the bill surrounded by Dylan’s parents and sisters, local legislators, and the Hindman family, whose two-year-old daughter, Naomi also
has Krabbe disease.
“I think he’d be very proud of momma and daddy, family and his community,” Emery said.

Top photo courtesy of the Office of the Governor