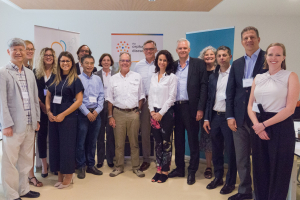 GREENWOOD, SC – Charles Schwartz, PhD, Senior Research Scholar and former Director of Research
at the Greenwood Genetic Center, recently attended a scientific meeting on ZC4H2 deficiency in Dubai. Schwartz and his team at GGC, along
with Korean researcher Dr. Cheol-Hee Kim, first identified the gene for this rare disorder in 2015.

Schwartz described the meeting as a ‘think tank’ designed to bring together clinicians and researchers from around the world to discuss the current state
of research on this rare disorder and brainstorm ways to move toward developing a treatment.

ZC4H2 deficiency, also known as Miles-Carpenter syndrome, is an ultra-rare genetic disorder with fewer than 50 patients diagnosed worldwide. Patients
with this condition can display a variety of muscular and neurological symptoms including low muscle tone, joint contractures, muscle atrophy, seizures,
and global developmental delay. The ZC4H2 gene is located on the X chromosome. Males are more severely affected than females, who may display
variable symptoms.

“With these ultra-rare conditions, families quickly lose hope of scientists developing effective treatments because there are so few individuals working
on their specific disorder,” said Schwartz. “Meetings like this one not only renew that lost hope, but bring together people with varied expertise
and perspectives to brainstorm and develop meaningful collaborations to move this work forward.”

Schwartz is working on several projects that came out of the meeting including using facial recognition software to help identify patients more easily.
He will also work with other researchers and clinicians to perform testing to identify metabolic changes or gene expression patterns to help diagnose
patients sooner and identify potential targets for treatment.

Schwartz, who hosted a similar meeting in Greenwood last year for another ultra-rare disorder, Snyder-Robinson syndrome,
noted that these types of international gatherings hold great promise for progress.

“When we bring all stakeholders to the table together we can have the types of discussions that really stimulate innovative solutions,” added Schwartz.
“We feed off of each other scientifically, and we learn so much from the patients and families. Their presence makes this personal and gives us greater
motivation to succeed.”

The meeting was co-sponsored by the Orphan Disease Center (ODC) at the University of Pennsylvania and the ZC4H2 Deficiency Research Foundation. 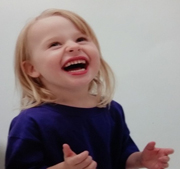