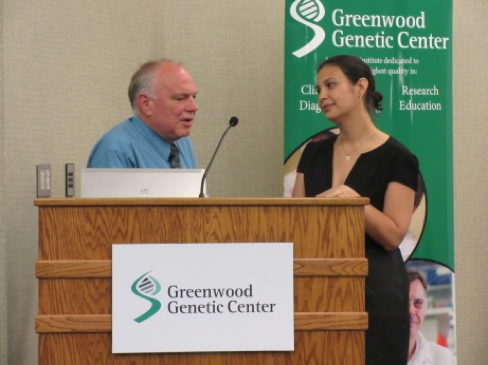 Carolina Escobar is a 3 year old girl from Honduras. Her initial months were happy and healthy, like any typical infant, but then something happened that caused great concern.

Around 18 months of age, Carolina began regressing – losing abilities and skills that she had acquired. Her mother, Iris, brought her to see an American medical mission team from South Carolina in January with the hope of finding answers. Little did she know at the time that Iris would not only receive the answer she had been desperately searching for, but that her daughter would be diagnosed by a physician who had expertise in her rare disorder, and one who is actively searching for a treatment.

Carolina has Rett syndrome, a genetic neurodevelopmental disorder that affects approximately 1 of every 10,000 females. Girls with Rett syndrome develop normally for the first months of life followed by a regression of development resulting in lifelong severe language deficits and intellectual disability. Most are unable to speak and have limitations in walking and the use of their hands.

Carolina and her mother were seen in Tegucigalpa, Honduras by GGC Research Neurologist, Dr. Ken Holden, and GGC Director, Dr. Steve Skinner. Skinner has studied Rett syndrome for many years and is currently a part of the National Institutes of Health’s Rett Syndrome Natural History Study. He has evaluated over 150 patients with Rett syndrome and is working through GGC’s Treatment Initiative to develop effective therapies to treat patients with Rett syndrome. Skinner and Holden recognized the signs of Rett syndrome in Carolina and the diagnosis was confirmed at GGC by a blood sample that was sent back to the Greenwood lab.

For over a decade, Dr. Skinner has been part of a medical mission team that travels annually to Honduras from Main Street United Methodist Church in Greenwood. “Most of the patients we see are in need of very basic medical care,” shared Skinner. “However, when we see patients with developmental or other genetic concerns, my colleagues at the Greenwood Genetic Center have always stepped in to support these patients by making laboratory diagnoses, assisting with therapies, and providing expertise that these families would otherwise not have access to.”
“I was drawn to Iris and her daughter when they first entered the clinic. I call it my Holy Spirit collision,” shared Kathy Kelly, Program Director for Main Street United Methodist Church and member of the mission team. “As this story was unfolding in Honduras, all of us on the mission team knew this was more than coincidence – that God’s hand was in this situation. We all knew we could do more for this family and that Greenwood was the place they needed to be.”
Kelly shared her idea of bringing this family to Greenwood with the congregation of Main Street UMC. “They responded immediately and generously to provide the funding to for Iris and Carolina to travel to Greenwood and obtain the medical services she needs,” said Kelly. “And their prayers and spiritual support have been just overwhelming,” added Iris.

Carolina and her mother arrived on June 24th and are being hosted in Kelly’s home. Iris shared her story with both the Main Street UMC congregation as well as the employees of GGC. She and Carolina spent several days at GGC with Dr. Skinner and his clinical team and then traveled to Birmingham, AL to attend the 9th Annual Southeastern Rett Syndrome Alliance Conference.
“We timed their visit to make sure they would have the opportunity to meet not only with medical experts but to attend this conference and meet other families impacted by Rett syndrome,” said Skinner. “Having connections and support from others who are walking the same journey is a tremendously helpful for families facing a rare diagnosis, and is a resource that is lacking in Honduras.”

Skinner was encouraged to participate in these trips by Holden and his wife, Pat, who have been involved in Honduran missions for nearly three decades. “The Holdens’ passion for the Honduran people is both inspiring and contagious,” said Skinner. “Their work in Honduras has lead to numerous rare disease diagnoses and treatment for Honduran children, as well as expanded curriculums in pediatric neurology in that country’s medical school system.”