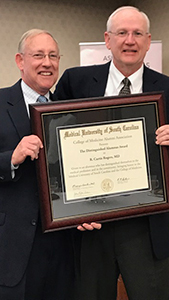 March 24, 2017 – Curtis Rogers, MD, Senior Clinical Geneticist in the Greenville office of the Greenwood Genetic Center (GGC), was named a 2017 Distinguished Alumnus by the Medical University of South Carolina (MUSC).

MUSC annually recognizes alumni for outstanding service to the profession of medicine and to society and for
notable accomplishments in biomedical research or clinical practice or medical education with distinction
bestowed locally, nationally or internationally.

Rogers, a 1980 graduate of MUSC, joined GGC in 1985 as a fellow and was instrumental in the Center’s expansion to Greenville in 1988.

He was recognized for his dedication and commitment to families impacted by a wide range of genetic disorders,
as well as his scholarship, particularly in the identification and study of Phelan-McDermid syndrome, a
genetic disorder causing intellectual disability, delayed or absent speech, symptoms of autism spectrum
disorder, motor delays and epilepsy. He helped found the Phelan McDermid Syndrome Foundation (PMSF)
nearly 20 years ago and currently serves as Chairman Emeritus.

Rogers is also President of the Board of InDwellings, Inc., an Upstate nonprofit that provides community-based homes for adults with developmental disabilities.

“Dr. Rogers is such a compassionate physician regularly going out of his way to do whatever is needed,” said Allison Bellomo, MS, a genetic counselor in GGC’s Greenville office. “His heart is truly focused on the care of his patients and their families.”

“Curtis is a tireless champion for our children and a much sought after resource for parents,” said Nick Assendelft, Vice President of the PMSF Board of Directors and Foundation co-founder.

“On behalf of all our families and the PMSF, we would like to congratulate Dr. Curtis Rogers on his well-deserved Distinguished Alumni Award,” said Susan Lomas, Acting Executive Director and co-founder of the PMSF.

Rogers was recognized during the MUSC School of Medicine Alumni Reunion Weekend in Charleston on March 18. 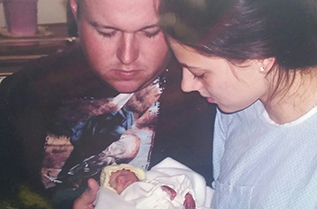