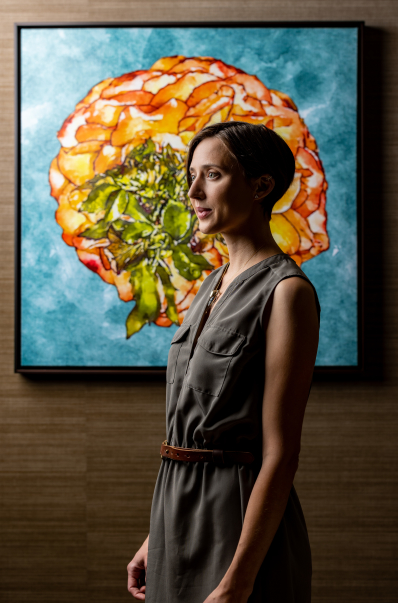 The lobby of the JC Self Research Institute at GGC has been transformed into a garden – of sorts.

The Center is hosting an art exhibit through December 15 entitled ‘Rare Roses’ that consists of 12 paintings that depict real roses with genetic variations. The series was created by Nicole Shannon, an artist from Greenville. Nicole was inspired by her son, who has a rare genetic disorder, and other individuals with genetic differences.

Quinn, now 4, was born with a myriad of health issues and complications. An ultrasound midway through Nicole’s pregnancy identified the first glimpse that there may be a problem. After Quinn was born, genetic testing was performed and GGC’s diagnostic laboratories identified a translocation between chromosomes 6 and 14 that resulted in the loss of 263 genes.

“Until I had a child with a DNA difference, I didn’t know what it was like for people with genetic differences,” shared Nicole in a presentation that she made about her family and her artwork to GGC employees as part of the Center’s Gene Week in October.

“I was aware of how pervasive racism, sexism, classism, and religious prejudice are, but I never realized how dismissive people could be of other humans when they have a DNA variation. I’ve experienced many instances where my son has been treated as less than due to his DNA,” she said.

Nicole recounted her family’s experiences from the time of Quinn’s birth where people, even medical professionals, have acted “shocked that I unconditionally love my son and wanted what is best for him. They didn’t see him as my son, my little boy, but as a freak – a mistake of nature.”

That’s when she first encountered Dr. David Everman, a clinical geneticist in GGC’s Greenville office, who met with Nicole and her husband, Brendan, to discuss the genetic testing results.

“Thankfully, we eventually met Dr. Everman, and in a moment, everything changed,” said Nicole. Everman, who retired from GGC in 2021, “was able to bring clarity to what caused Quinn’s challenges. He was calm and shared only what he knew – without making assumptions of what he didn’t know.”

That was a turning point for Quinn’s family. From that point on Nicole and Brendan became fierce advocates for their son – challenging the assumptions being made about his abilities.

After 56 days in the NICU, Quinn went home, just in time for Christmas with his family, without a breathing tube and without a catheter, thanks to persistence and advocacy by his parents.

The family soon travelled to Boston Children’s Hospital where Quinn was accepted into the Center for Complex Care. He was evaluated by 27 specialists over the course of two exhausting weeks. He passed a swallow study and was cleared to eat, and they also initiated physical and occupational therapy.

Since that time, “Quinn has grown and improved in so many ways,” Nicole said. “When we think back on what Dr. Everman told us – this was the possibility, this was the hope.”

Nicole’s experiences, and her unconditional love of her son, inspired her to find a way, through art, to express that every human is valuable and beautiful, regardless of their DNA.

She chose the rose, a symbol of beauty, because “roses are revered in almost every culture, and as living things, I was sure they must have genetic variation.”

Nicole reached out to botanists all over the world who shared images of roses that have genetic differences. “I was amazed by the photos and knew immediately that I needed to paint them.” 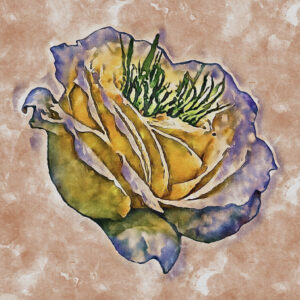 Five of the paintings are double flowers where the central reproductive organs of the flower are replaced by additional petals. The flowers appear fuller, and for this reason, many of the roses that are sold in floral shops and grocery stores actually have this genetic alteration.

The other seven paintings reflect phyllody, a genetic change that causes the reproductive organs of the flower to be replaced by leaf-like structures (as in ‘Rare Rose 11’ pictured right).

“Each painting shows that we are all uniquely beautiful and deserving of love,” Nicole added.

GGC welcomed Nicole for an artist reception on October 6. Prior to the public event, she shared her very personal and moving story with GGC employees. She is donating 80% of the proceeds from the sale of Rare Roses to the Greenwood Genetic Center Foundation.

“I can say without a doubt that Quinn would not be where he is today had the Greenwood Genetic Center not armed us with the knowledge and support we needed to help Quinn thrive.”

“Dr. Everman provided calm, clarity, kindness, and support when everyone around us seemed overly anxious, emotional, and fearful,” she added. “He undoubtedly changed the course of Quinn’s care and with it, his life.”

Learn more about Nicole and her Rare Roses series at nicoleshannon.com. You can also follow Quinn’s progress on Instagram @OurMightyQuinn. 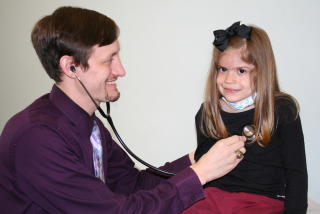 We will remember February 26th for the rest of our lives. On that day, we received the call from the Greenwood Genetic Center that they had discovered our daughter, Ella Marie, has Kleefstra syndrome. Very early on, my wife, Kelly, observed Ella being delayed in some of her milestones. Kelly monitored Ella’s progression and sought out testing in an effort to get Ella some assistance. Along the way, we were sent to GGC and met with Dr. Roger St...
LEARN MORE